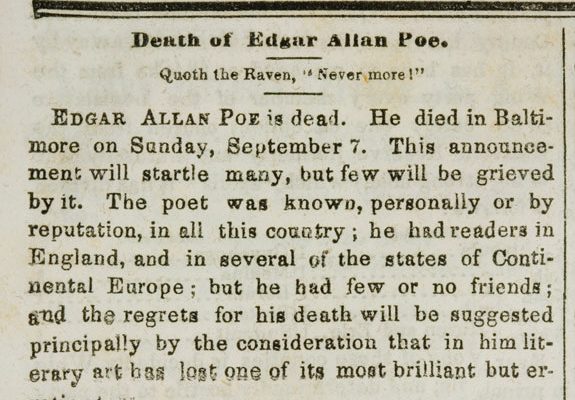 On the morning of Edgar Allen Poe’s funeral in 1849 a long obituary appeared in the New York Tribune slandering the deceased. The obituary, signed Ludwig, claimed that Poe was a drunk, opium addict, and womanizer. Ludwig wrote, Poe “Walked the streets in madness…lips moving in indistinct curses.” His “heart gnawed with anguish, his face shrouded in gloom.” As Poe’s body was being lowered into the earth, Ludwig was beginning a massive, calculated deception that involved altering documents relating to Poe’s life, deliberately lying and misquoting Poe, a fraud so strong that to this day Poe’s personality is associated with drunkeness, madness, drug addiction, and perversity.

Meanwhile, Rev. Rufus Wilmot Griswold, Poe’s official biographer and editor, came out with volumes of Poe’s poetry, stories, and essays. Griswold’s had a hard time collecting and editing Poe’s works since Poe re-published his writings in many magazines and newspapers, revising them each time. But Griswold was loyal to the task, generating a remarkably complete collection, and he probably received no pay for the entire undertaking. In newspaper articles Griswold praised Poe’s creative talent.

One of the most difficult tasks for students of American literature has been to reconcile the Ludwig lies with the faithful labors of Rev. Griswold. Ludwig and Griswold were the same person.

Poe had appointed Griswold as his official biographer. Soon after Poe died in Baltimore at age 40, Griswold began simultaneously undertaking the project entrusted to him by his late friend as well as destroying the personality of the man.

We have no record of him having a pulpit. He began working his way through the publishing hierarchy becoming the most respected editor, anthologist, and publisher of his day. Setting a standard for future editors, he produced the first American edition of Milton’s prose and published anthologies of American writers, including a volume of American female poets: very innovative for 1848.

Griswold worked on the staff of the leading East Coast magazines including the New Yorker, becoming known for his hard work and integrity. As well as writing poetry and short stories himself, he helped launch the careers of several other young writers and journalists, making a significant contribution to the formation of an independent American literary presence.

Poe’s poems were included in Griswold’s 1841 anthology of American poets, and the famous horror story “Fall of the House of Usher” was included in a volume of American prose writers collected by Griswold in 1847. Griswold wrote complementary remarks about Poe’s works, saying that the little-known Poe showed great talent. Griswold asked Poe to write a short sketch about himself to be included in the first anthology. Poe sent him a flattering but totally fabricated biography, and Griswold published it the way it was.

The 1841 anthology provided the opportunity for the two men to meet, and they struck up a positive friendship: Griswold, ever friendly, described Poe as an elegant gentleman, and Poe wrote that Griswold was an excellent poet and the foremost authority on American literature. Poe and Griswold were united in an effort to create a generation of literature independent from Europe.

The two young writers also shared a fanatical concern for maintaining high literary standards, but they followed different Muses. Griswold fell inside the mainstream of the burgeoning publishing world and prospered. Poe became a critic, at times attacking even the most respected writers, making himself an outsider. After the affinity of their mutual idealism, they fell out a year later when Graham’s magazine dropped Poe as editor and hired Griswold, paying him $200 a year more.

Poe, a sensitive man, no doubt resented that Griswold, a cunning but uncreative arranger of other people’s works, would take the editorial job from him, the arrangement being made behind Poe’s back, but after a few years Poe buried the hatchet and worked with Griswold again. The literary world was small, and Poe knew that he had to work with Griswold.

Poe wrote stories for Griswold, and Griswold published them in the magazines he edited. Eventually, Poe must have trusted his rival enough to want him to become literary executor—no man seemed as qualified. Griswold too respected the writer of horror stories and clever poetry—he never tried to underplay Poe’s creative genius. Poe is given credit as the father of the detective novel and the genre of horror tales.

But their ideas also clashed: Poe was an innovator who espoused a pantheistic and Platonic philosophy while Griswold, a traditional Protestant and literary conservative, represented a church Poe never visited. While Griswold genuinely admired Poe’s creative work, he couldn’t have escaped noticing a pagan threat in his writing.

Poe also had a gift for creating enemies. The little money he made came from writing magazine articles and stinging criticisms of other writers, tactlessly exposing their faults. No writer was immune from Poe’s witty but acid pen, even calling the wellloved Henry Wadsworth Longfellow a plagiarist.

Although future generations would look to Poe as the father of new schools of literature based on the ancient axiom “art for art’s sake,” his peers, including Griswold, kept Poe outside their literary clique. Poe loved sounds, slippery sounds like Annabell Lee, and used them to form a melody in poetry. Emerson, who thought that literature should be a spontaneous outpouring of the soul and should uplift the reader, called Poe the “jingle man.” Poe’s ideas about rhetoric remained outside the established literary society that people such as Griswold frequented.

Two years after the Ludwig obituary, Griswold wrote a highly distorted memoir of Poe in International Monthly Magazine. It equated Poe with the characters of his grotesque horror stories. A mind that created such characters and situations, argued Griswold, was sick. Poe was immature, Griswold added, a creative genius but also an insecure, defective personality.

Griswold loved drama, but the attack on Poe was out of character with Griswold’s outwardly cordial and gentlemanly manner. No doubt Griswold was a cheat—he may never have been a minister-but the Poe scandal went too far. We can only guess why Griswold took the trouble to preserve as accurately as he could Poe’s writings for which e gained nothing. His name as editor on the volumes he produced appears modestly.

In the end Griswold’s slander boomeranged. In the 1920s Poe was rediscovered and recognized as an innovator of poetry and prose. Today’s historians only remember Griswold as Poe’s unscrupulous literary executor, an epitome of deceit. Thomas Lowell summed up the feeling of scholars by calling him a knave. Yet, we have to thank Griswold for compiling Poe’s work. Certainly the shady picture he painted of Poe was unfair, but it made Poe an eccentric, ultimately increasing his popularity.