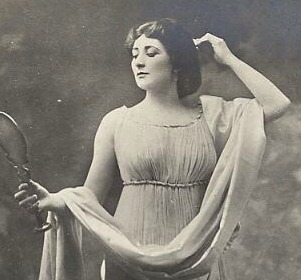 The myth of a harlot named Thais goes back at least to Alexander the Great. She supposedly got Alexander and his officers drunk one night and persuaded them to torch King Xerxes palace to avenge Athens. The tale is probably untrue but celebrated in Dryden’s Ode on St. Cecilia’s Day in which he compares Thais with Helen of Troy. Handel made an oratorio of it. The Roman playwright Terence, whose six plays feature pimps, prostitutes, and parasites—the essentials of opera—presents the beautiful Thais in his most popular play The Eunuch (161BC). Terence, a former North African slave, was sympathetic to marginal people, and the courtesan Thais is the play’s most sincere and admirable character.

The writings of the 4th century Egyptian Desert Fathers contained a Mary Magdalene story of a righteous hermit traveling to the city, disguising himself as a civilian, and converting the sinful Thais by preaching fire and eternal damnation. Realizing that she’s caused many men to sin, she spent three years mortifying the flesh and became a saint, though not officially canonized. The 9th century nun Hrosvitha (several spellings) of Gandersheim, Germany, wanted to answer the secular influence of Terence’s decadent characters by writing six morality plays, and her most popular was based on the Desert Fathers’ story. Hrosvitha, literate and cultured, offered simple tales of piety.

As an interesting aside, her hermit enters into a discourse on the “music of the spheres,” a theory taken from the popular Medieval writer Boetheus. The theory, formulated by Pythagoras (5th century BC) states that the planets make a sound as they orbit–the moon being the soprano and Saturn the bass–and that their distance from the earth corresponds to the seven tone diatonic scale (do, re, me…).

In 1890 Anatole France duplicated Hrosvitha’s tale, adding characters and a generous portion of philosophy, moderating the Medieval threat of damnation, and expanding the story into a modern novel, then he turned Hrosvitha’s morality upside down, and Massenet’s opera is based entirely on France’s novel. Although few read Anatole France any more, he was incredibly popular in his day, and his novel about the holy ascetic converting a harlot then falling in love with her was all the rage, though priests condemned it. Massenet and his librettist Louis Gallet assumed that opera goers knew the story. They threw out the philosophy as well as part of the story, including bits that would make it more understandable if you didn’t know the story.

According to clues in the novel, Thais was born around the beginning of the last and most brutal Christian persecution in 303 AD. Her parents were abusive pagans, but a slave who was later martyred taught her Christianity and had her baptized. She was forced to whore and became an actress and musician, a career open only to a loose woman–a perfect operatic soprano–and she achieves the pinnacle of success. When she stepped on stage, the crowd roared with excitement. She had it all: beauty, wealth, intelligence, the vigor of being alive, but her soul remained empty. She feared that her beauty would flag and that she would face death, so when Athanael comes out of the desert with the full force of righteousness and promises life eternal, she more than accepts: she can hardly be restrained.

Although Thais is the title role, the story is more about Athanael’s inner struggle between spirituality and human love. Thais goes from extreme worldliness to sainthood while Athanael goes the opposite direction, concluding that spirituality is an evil illusion. In the novel Athanael had become a great healer, with a reputation up and down the Nile for miracles. Mobs, including rulers, seek his intervention, yet try as he might, undergo one physical torture after another, he could never rid himself of his profoundly physical love for Thais.

His life has been a lie: the heavens, God, it’s all deceit, or as he says in the novel, “God, I spit in thy face.” A man who spoke with no-compromise boldness, the most rigorous and advanced desert ascetic who communed with angels and commanded nature, is reduced to a mass of whimpering confusion in front of Thais, or as Terence put it, “Stultifying your soul in a woman’s arms.” Freudians would assign Athanael a dozen polysyllabic labels. Thais initially sees through him, telling him, “A man made for love,” that he’s fooling himself, and Massenet’s score elaborates the deception.

The story takes place between the Egyptian desert and Alexandria, the world’s richest city until the rise of Constantinople. Founded by Alexander six centuries before (and Alexander the Great’s Thais became the first queen according to legend), and fed by the mighty Nile, Alexandria was the seat of learning, a center for science, philosophy, and the development of Christianity. It contained the largest Jewish community outside Palestine, the library, the harbor that fed the Empire with Egyptian grain, wine, papyrus, animals, glass, and art.

Men and women went to the desert seeking holiness through fasting and abstinence. Before these desert hermits the only expression of Christian spirituality was martyrdom. Some ascetics overdid it, torturing their bodies and their minds, believing it the avenue to holiness. They eventually congregated in units and built walls around themselves, and some, like Athanael, became abba or abbot, literally meaning father, attracting others who were either running from the world or searching for life’s meaning, and this was the beginning of Christian monasteries.

Massenet revised Thais after it premiered in 1894 and eventually created a most masterful opera whose melodies, beautiful for their simplicity yet sensually profoundly, stay with us long after we leave the theater. Few works have the haunting beauty of the orchestral Meditations which every violinist attempts, the soprano/baritone duet Wash My Hands and Lips which evokes love’s tenderness, themes that are repeated and give the work a consistency. I believe that Massenet’s ability to create mood inspired film music.